Posted at 18:46h in Preamplifiers by atm-audio 2 Comments

His name is Nutube, he was born in 2016 by Korg, famous for his musical instruments and Noritake Itron, a Japanese manufacturer of vacuum fluorescent screens. It is a double miniature triode valve, with low power and direct heating. Although it is a true triode, it is manufactured differently than traditional vacuum tubes, which gives it some unique attributes.

The Nutube (they have called it) is manufactured by Noritake Itron in Japan, using a process similar to that used to make vacuum fluorescent screens. In fact, it is a fluorescent vacuum display (VFD). The plate (anode) is coated with a phosphor as in a VFD, and shines with a bluish white color when there is current flow. If we look in detail at the Nutube, we will see a fine thread that runs through the device (see Fig. 1).

It’s about the filament. It is heated enough to emit electrons, but not enough to show visible brightness. Under the filament there is a thin and open mesh, this is the grid. Under this, there is a metal plate with the phosphor (shiny) applied, this is the plate (anode). Two of these elements are packaged together in a glass container. This is the double Nutube triode. Physically it looks a bit like an old 40-pin DIL integrated circuit, but it only has pins along one edge (see Fig. 2).

The two filaments share a common central terminal. A side effect is that this filament, under tension, closely resembles a piano string. When subjected to vibration or mechanical impact, it vibrates at an audible frequency (5 kHz or so). This microphonic behavior is identical to that of vacuum tubes and could cause problems when the Nutube is used in low signal applications. In these cases, it must be mechanically insulated.

The Nutube is a low power device, the filament consumes only 12 mW of power per triode and the plate dissipation has a power of only 1.7 mW. Due to this low power, compared to most traditional vacuum tubes, it also has a low transconductance (gm). In Table 1 we see a summary of the electrical specifications of the Nutube.

Although the numbers are slightly different from those of a common valve (for example, 12AX7), a look at the characteristic curves of the plate will be familiar to us (see Figure 4). The curves are typical of a triode and are quite linear. However, when selecting an operation point and a load line, we observe the maximum dissipation of the plate and the maximum allowed voltage of the plate, which significantly limits the operation. Also notable is the fact that, to obtain the maximum output signal with a low plate voltage, the grid must work in the positive region (Class A2). 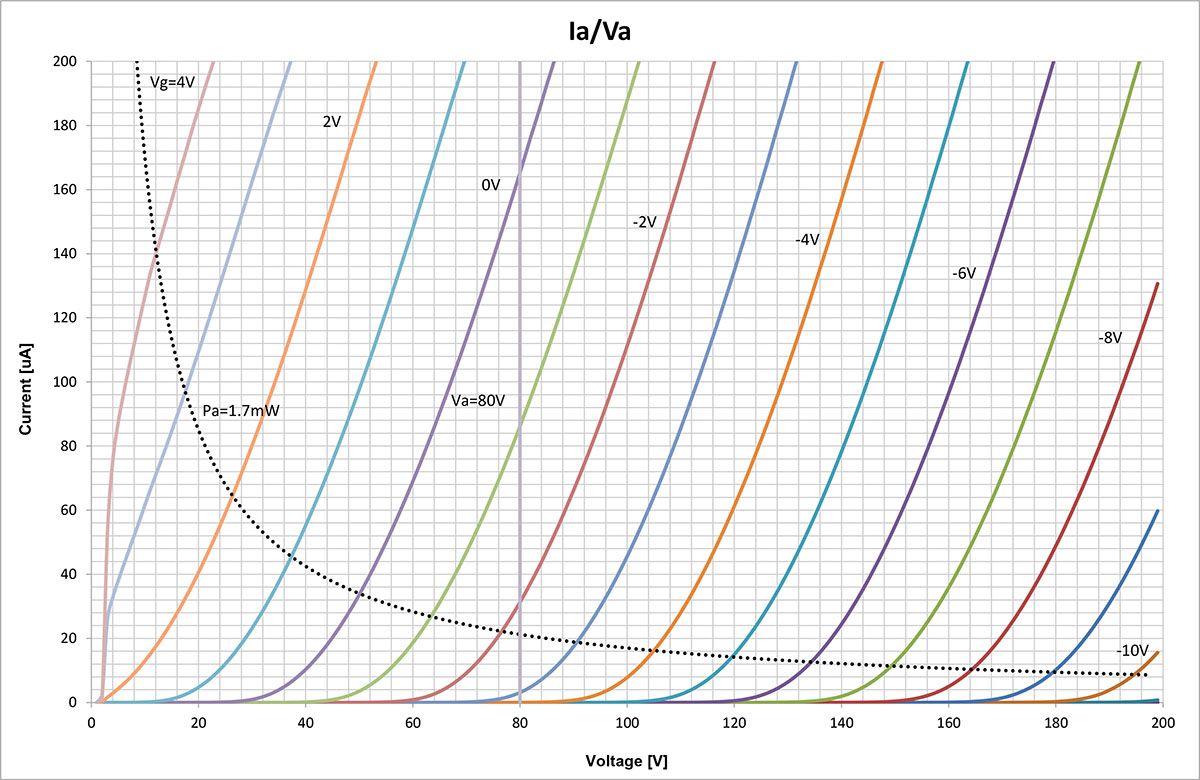 Since the great advantage of the Nutube is its ability to work with low voltage power supplies, most applications will use a positive grid polarization. This means that some current will flow through the grid, so a low impedance source, for example, a source follower, should be used to pilot the grid.

Another great advantage of the Nutube in an audio circuit is the triode character, which allows the adjustment of the distortion when the valve is operated on a voltage / current load line. For a given amount of current through the tube, there is a point at which the cathode current and the plate voltage are canceled, canceling the distortion of the second harmonic and leaving the third harmonic. This is the lowest output distortion setting.

The basic application circuit provided by Korg uses simple JFET source followers to regulate the signal inside and outside the Nutube (see Figure 6). An input buffer is used to support the relatively low impedance towards the grid and an output buffer to handle high impedance loads due to low transconductance and high plate resistance.

This circuit is designed to work with a single power supply between 5V and 30V. In addition, you need a regulated 3.3V source, usually with a low-drop regulator (LDO). The polarization is adjustable from 0 to +3.3 V. To support the grid current, a resistance of relatively low value (33 kΩ) is used to provide DC polarization to the grid. This requires that a coupling capacitor (10 μF) be used to couple the audio signal. There is no doubt that there could be some polarization change with the signal level in this arrangement, but with the values shown, it does not seem to be significant.

As with any vacuum tube, audio gain and distortion in particular depend on the implementation of the circuit. The polarization point and the plate load characterize the performance of the equipment.

We have performed some tests using the Korg application circuit, with the recommended polarization and plate load, to determine the audio performance. All tests were performed with a grid polarization voltage of +2.5 V and a plate load resistance of 330 kΩ. With a +12 V supply, the circuit provided a gain of approximately 2.6 times. With 0.5V RMS input and 1.35V RMS output, the total harmonic distortion (THD) was around 1%. THD increases with the level as expected.

In Figure 7, the horizontal axis is the output voltage. The red line shows the THD with respect to the output. THD reaches 5% at approximately 3.5 V output.

By changing the polarization and / or the plate load, harmonics can be adjusted as desired. A small change in polarization will change the relative levels of second and third order harmonics. Negative feedback can also be used to change a minor gain for a minor distortion.

The Nutube is designed to be used in various audio circuits, mainly in musical instrument applications. Its low power requirements allow its use in battery-powered systems, such as a guitar effects pedal. However, due to its low GM and its corresponding noise, it is difficult to use in very low signal applications (for example, the input stages of RIAA microphone or phono preamps). The Nutube can also find use in high fidelity audio equipment, such as line preamps.

To conclude, according to the audio performance measurements, the Nutube acts as a signal processing device. That is, it provides a voltage gain, but if the objective is to obtain an accurate voltage gain, it is better to use other components such as transistors or operational amplifiers.

In a guitar amplifier, it can be used to provide a distortion similar to that of a conventional valve, but with much lower voltage and power requirements. In high fidelity, it can be used to emulate the harmonic characteristics of the triode SE valve power amplifiers. It is not certain that everyone has the same taste, but it opens up some interesting possibilities.

Using the Nutube together with JFET transistors, we have designed an input buffer to pilot the Hypex NC500 module and the Purifi Audio 1ET400 module (Fig. 8). This combination produces a great output power and, harmonically, is very similar to a triode SE valve power amplifier. It feeds on the power supply of the power module itself and each channel occupies only a few square centimeters. It would actually be smaller and much less expensive than a large valve amplifier.

The Hypex NC500 (or Purifi 1ET400) power module has a very low distortion by itself (less than 0.007% at 1 W), but as with most Class D amplifiers, the low level harmonic distortion is so low, which make them cold or analytical. There is a theory that says that, at a higher level, lower order harmonics mask listening to higher order harmonics. The idea of ​​this assembly is that the sound of the class D amplifier would be controlled by the Nutube input buffer with its relatively high distortion of low order (mainly second harmonic). The measurements are similar to a valve amplifier and the people who have heard it agree that it actually sounds like a valve amplifier, but that the damping factor and dynamics have greatly improved due to the low output impedance of class D.

Another project under development is a minimalist line preamp also based on the Nutube. It will have three inputs, a volume control and an output, all with RCA connections.

Although it will not make conventional valves (for example, 12AX7) obsolete, the Nutube can be a useful device for audio enthusiasts. Hopefully you will find many uses in musical instrument amplifiers, guitar effects and high fidelity equipment. Its low power and low working voltage facilitate experimentation for those who are not familiar, or do not feel comfortable, working with the high voltages typically used with valve circuits.

We will see what the Nutube valve holds in the future.