Posted at 00:00h in Preamplifiers by atm-audio 0 Comments

Development of a digital-analog converter using the Sabre ES9038PRO chip

We will begin the development of a DAC based on the Sabre ES9038PRO chip. It will be a high-end DAC, with high quality components, so it will not be cheap. We take into account that there are already models in the market that use this chip and if we see that the price of the development goes off, we could request the license of a kit and modify it. Once contacted Sabre, they gave me all the technical information of the chip, signing a confidentiality contract and advised me that before starting from scratch with the project, I would study the kit versions that were available in the market. Having studied all the information and seeing that the development was quite complex and expensive, I chose to buy a couple of kits from a manufacturer. When I received it, I started doing technical and sound tests and, although it sounded more or less good, it didn’t sound as good as it should sound, more so in the case of an ES9038 Sabre. Making a detailed inspection of the PCB, I found several problems and failures of serious designs. It was expected based on a Chinese product. I contacted the manufacturer and reached an agreement to provide me with all the information on the design of the board and I would make all the modifications and improvements and return them to be manufactured. The first thing we did was make some first modifications to the original PCB, replacing the most critical components (electrolytic and polyester capacitors of the power supply) with others of recognized brand (Nichicon and Wima) For the main power supply, we opt for Mundorf M-Lytic series electrolytic capacitors. These capacitors are characterized in that they have a very low resistance (ESR) so that the loading / unloading becomes very fast, helping to have a very high dynamic.

We also had to design a control that acted, both as input selector, as volume control. For this we use a Grayhill optical encoder with its associated electronics.

For the current / voltage converter (I / V), balanced output signal and RCA output signal, we were testing several operational amplifiers on the market. In the tests we use operational instrumentation, operational used in medical line, discrete and operational components of high specific manufacturing range. Although the instrumentation and medical line operations gave us very good results, we finally adopted the Sonic Imagery SIL994 Enh Ticha model. These operational work in class A and provide a high output current, being able to connect to any stage of market power, be it valves, transistors, class A or class D, as well as any preamplifier in the market.

Once all the component tests were carried out, the printed circuit board was redesigned eliminating the initially detected faults, mass planes (analog and digital GND) were added, tracks were moved, a delay circuit and output protection were added ( very similar to speaker protection) with relays of very low contact resistance. The LCD display was replaced with one of OLED technology and the screen printing of the display itself was modified. The physical spaces were also adapted to be able to install the new low-noise voltage regulators of the Sparkoslabs brand SS78xx and SS79xx. The new design was sent to the manufacturer to make the new plates with our screen printing and identification.

Once the new PCB were received, they were mounted with the aforementioned components and, in addition, new components were added, including Sparkoslabs voltage regulators, balanced Neutrik and RCA Elecaudio gold-plated connectors, high-speed Schottky rectifier diodes, the connectors for the toroidal transformer and, finally, a 100MHz TCXO quartz crystal with a stability of 50ppm

For the digital input circuit with USB connection, we had two options: one of them used the XMOS chip and the other the Amanero. We opted for the latter because it is compatible with sampling rates of up to 384KHz and DSD512 under Windows.

Since the optical encoder gave us some problems, a mechanical encoder was finally chosen as input selector and volume control. 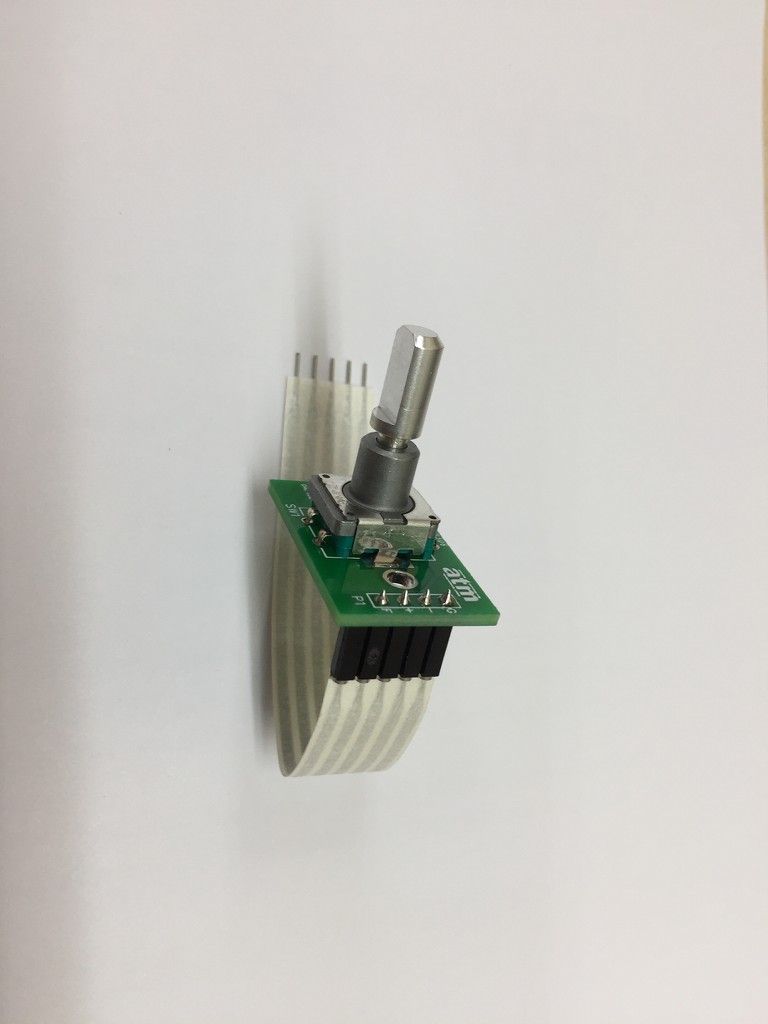 The PCB once finished.

Parallel to all the tests carried out with the electronics, the aluminum chassis was designed and shaped. The chassis maintains our identity sign already imposed on other products of the brand. It is a monobloc aluminum chassis that has been lowered by numerical control the different compartments where the electronic components will be housed. With this we achieve that there is no interference between the different sections. For example, the toroidal transformer, when “stuck” inside a hole in the chassis itself, the interference created by the magnetic field will not affect the rest of the circuit. The same goes for the network switch, the graphic display or the encoder.

Rendering tests are done to see the different termination options. In this case we visualize two types of windows that we can do in the chassis to put the graphic display.

The tools are prepared, installed on the carousel of the CNC machine and the movement is programmed. The aluminum block is fixed on the base of the machine and the relevant adjustments are made to start work.

And the prototype of the chassis already finished.

The placement of the graphic display is checked. This will be on the front. You just need to program the logo.

The back panel is prepared for testing, in the absence of some adjustments.

Two robust bronze control knobs are prepared. Given its size and weight, they make it very manageable and precise in movements. Thus they remain in the prototype box.

Once all the mechanical and component placement tests have been carried out and some small adjustments have been made, the chassis prototype becomes the final version. It is time to anodize the chassis. We have made them in black although you can choose other colors (silver, red, blue, champagne gold and chrome)

And this is the final assembly process to the aluminum chassis. First, the main PCB is inserted, then the transformer, power switch, input / volume selector control, graphic display and final equipment wiring. 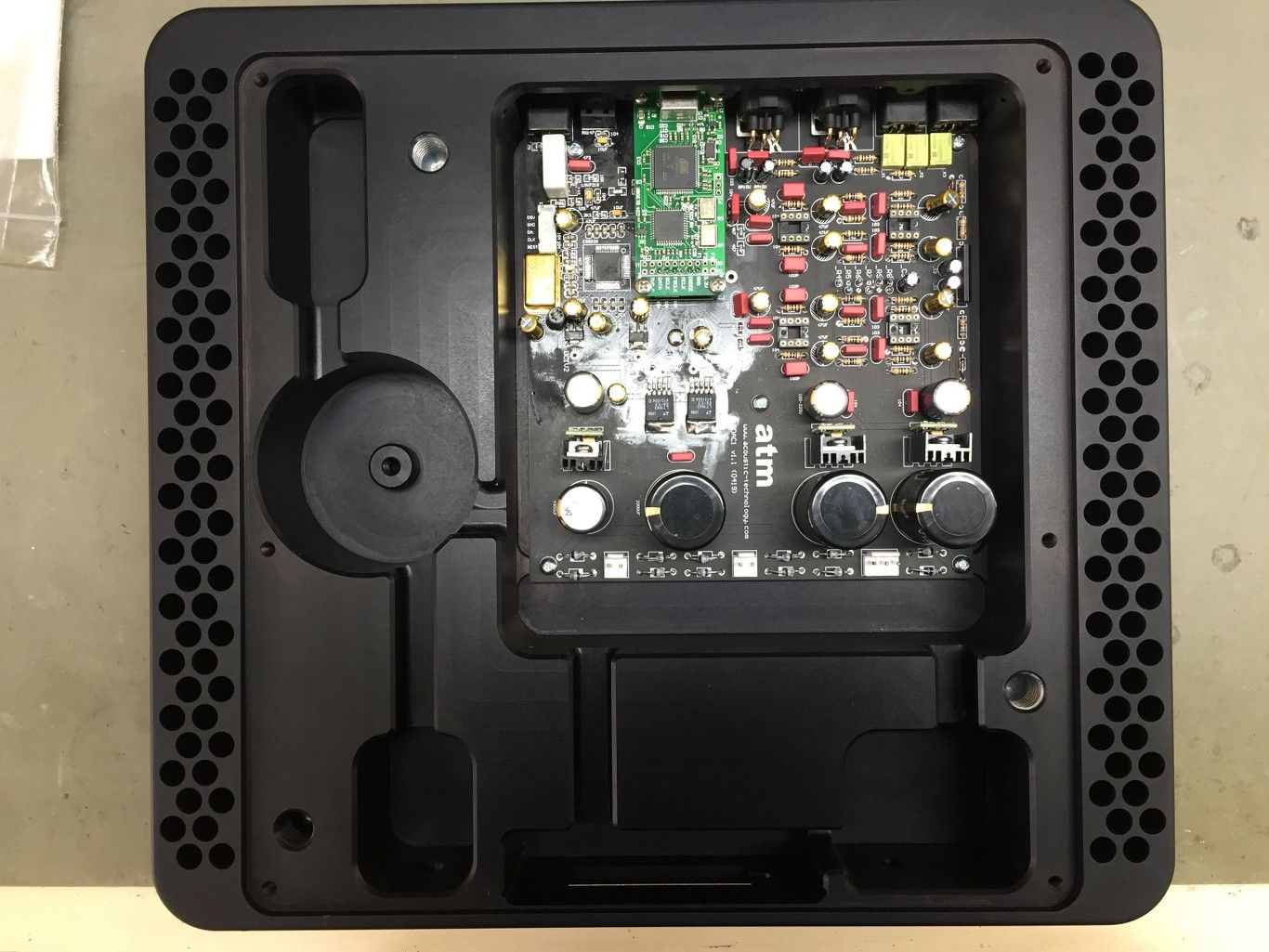 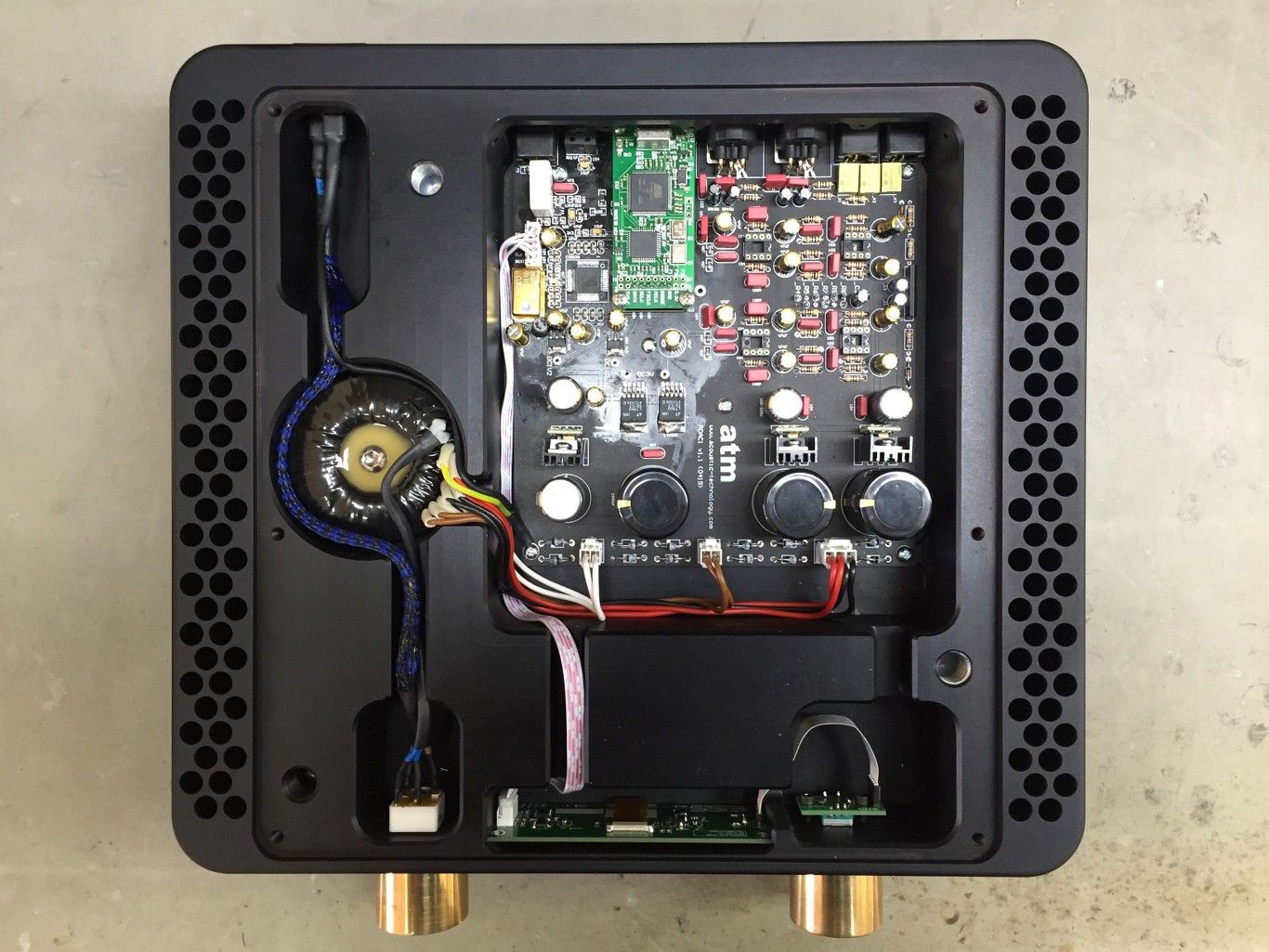 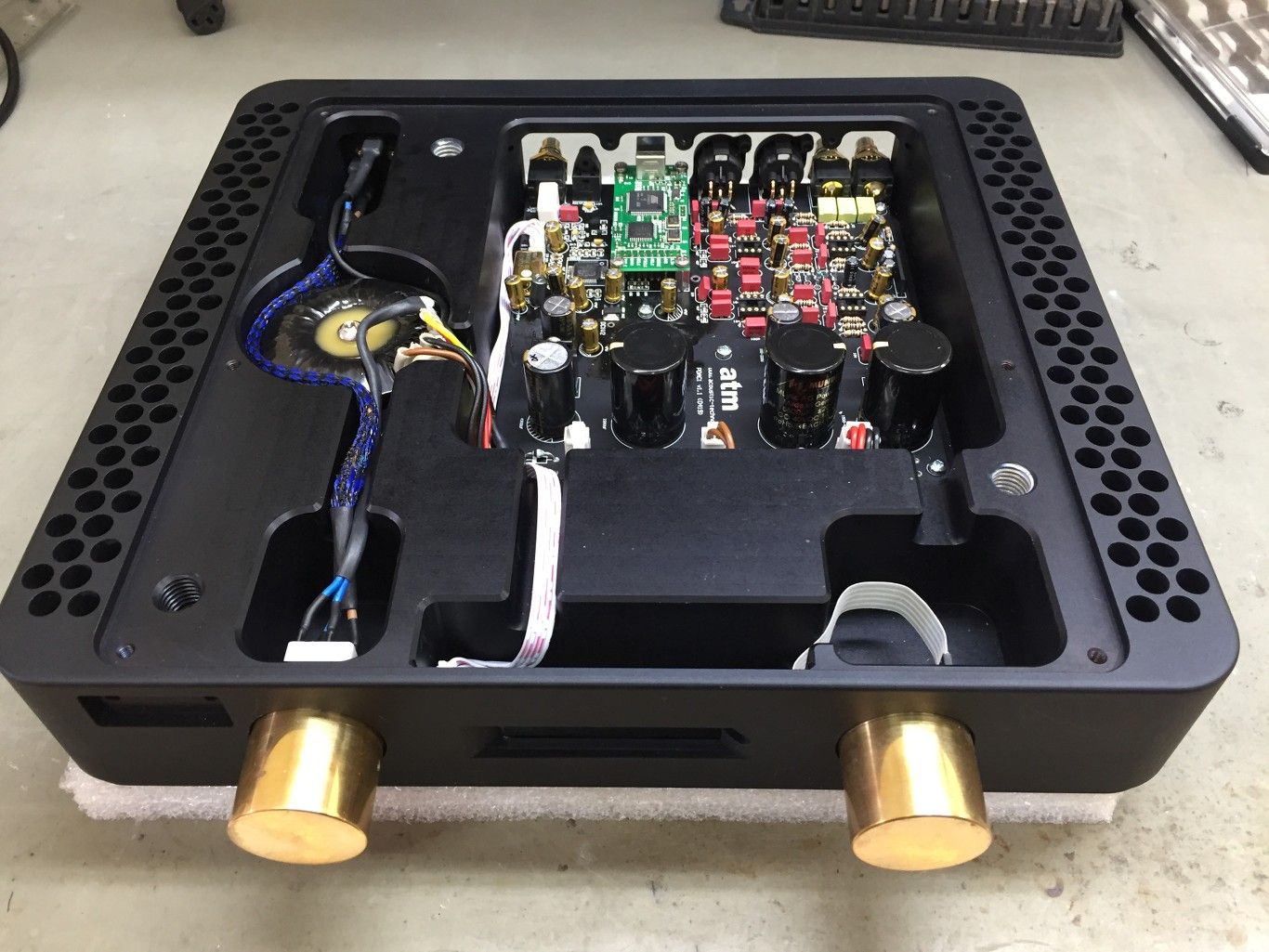 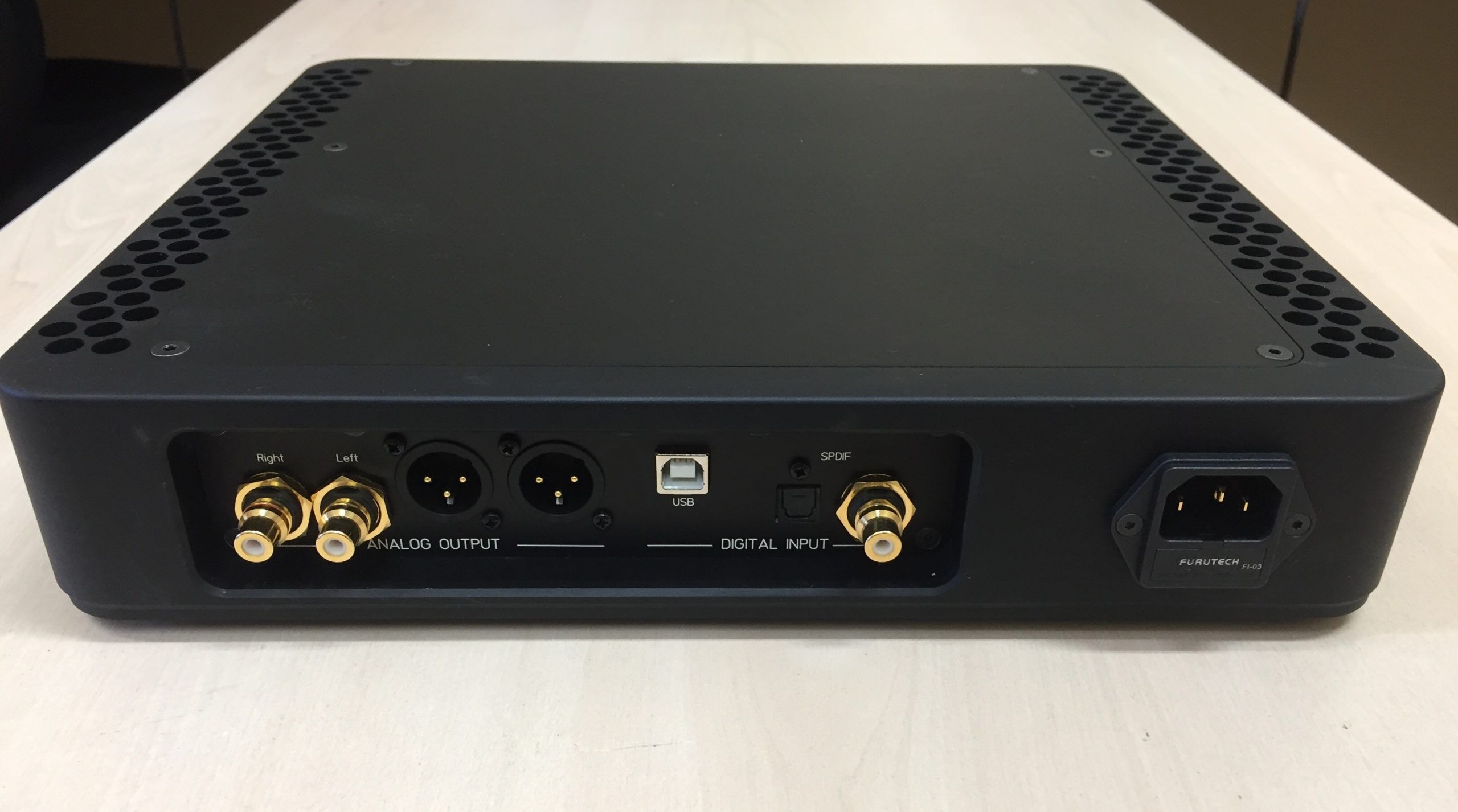